Unless you just stumbled on this blog by chance or live on the planet Mars, you know that I traveled to Los Angeles to see Bush’s first show together in 8 years at the Epicenter Festival. I won a pair of tickets on Twitter and the rest is history. What you may not know, however, is that I was able to watch the entire set from on the stage!

The story is one you hear of in fairy tales, most definitely not in real, day-to-day life and I still can’t believe how all the pieces fell perfectly into place. But they did. And it all began with one of my many silly fangirl dreams. I was at Bush’s first show with my Twitter buddy, Christine, and Gavin decided to have us watch it from the stage! There were a lot of other ridiculous dream-like details such as having to run backstage and change into “stage outfits,” but I left those out when I decided to post about the dream on Twitter and address it to Gavin himself. I went about my business as usual, when I randomly checked Twitter during a work meeting. I was almost knocked off my chair when I saw that Gavin had replied to my tweet with a simple, “duly noted.” Shortly after, he announced a contest and the grand prize was watching their set at Epicenter from…wait for it…ONSTAGE.

You can imagine how thrilled I was when I found out a couple of weeks later that Christine had won! Half of my dream was going to be realized. It was incredible. But what was more incredible? Christine chose me as her plus one! I immediately thought of  Penny Lane and her famous quote from Almost Famous: it’s all happening.

I met up with the rest of the Bush Army (a group of the band’s most loyal fans) in Fontana Friday night and although I was a little anxious at first, was so excited to meet them all. The anxiety was definitely not needed, it was as if we had known each other for years! Although the fun badges I made for all of us to wear ended up breaking before we even got to the festival, you could definitely still feel a certain sense of comradery between all of us.

Although the heat was definitely against us (peaking at about 106 degrees that day), we made the most of it and hid under a Jägermeister tent until it was time to brave the crowds. Luckily, we didn’t have to jump into the somewhat scary sea of attendees like the rest of our crew, but wait by the backstage entrance. It was a grueling 30 minutes or so, especially when the band’s start time was nearing and we still hadn’t been “picked up” by their manager. I had started my nervous pacing by the time he ran up to us to lead us up to the stage. I can’t even properly wrap my head around the moment when we climbed up the staircase that lead to the main stage. I told myself that I would film that entire moment, but of course, I completely forgot when it was actually happening.

I think the picture above does a great job of depicting how I felt. I kind of wanted to laugh, cry, scream and vomit at the same time. It was just all sorts of crazy. I couldn’t really wrap my head around what was happening, but I tried my best to take all of it in, but living in the moment can be pretty difficult especially when my emotions were set to hyper drive (and I had just had a huge jäger shot). Before I could manage to regain my senses, the band appeared to our left ready to take the stage and it was a whirlwind of awesome from there! 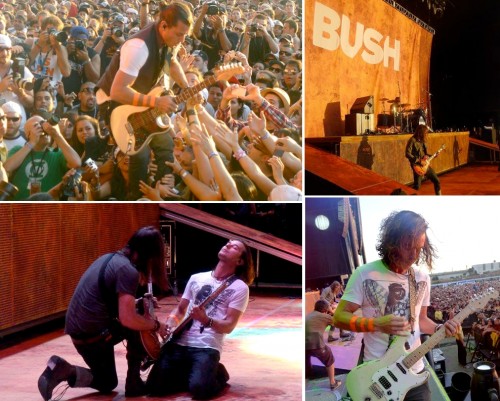 I’ve only seen Bush as a unit two times in the past, so I’m not sure if I am qualified to make such a statement, but I have never seen the band so energetic and passionate. They came out with a mission to rock our faces off and I’m pretty sure they accomplished it. Their set list, although short, was peppered with crowd pleasers such as Little Things and Machinehead as well as pleasant surprises such as Greedy Fly and a rockin’ version of Glycerine. Gavin reverted to his old ways by jumping into the crowd and drummer, Robin, was grinning ear to ear as he sang along with all the songs. Both Bush “newbies,” Chris and Corey, weren’t to be upstaged by the veterans either. They ripped through the old hits with a vengeance. And again, I tried to soak it all in as best as I could.

Since I knew my memories would be hazy just from the sheer excitement of it all, I took plenty of video. Unfortunately, they are way too embarrassing to post in their entireties because of my our lack of talent in the singing department. Remind me to never sing along at another concert again (yeah right). Because of that, I had to chop them up into little snippets of amazingness.

We were ushered off stage before the set finished, which I was OK with until the security started acting a little less than friendly with us. At one point, I was physically pushed off the stage by a security guard, which really managed to tick me off. However, right after we were joined by the guitarist, Chris, for quick hello’s and hugs (he’s such a great dude). I managed to snap a quick picture with him before we were told for the umpteenth time that we had to exit the backstage area and a mystery full beer bottle was smashed right behind me. Definitely our cue to leave.

Overall, the show was absolutely spectacular and has me really pumped for the Tampa show in 2 weeks. I can’t wait to see what they are going to do as headliners, especially in such an intimate venue as The Ritz. Is there anyway I can secure a spot on the stage again, boys? 😉