Any of you that follow me on this blog surely know by now that Bush has been and continues to be one of my favorite bands. At times I am mocked for loving bands from my youth, but I can’t help it. I’m loyal. Once I loved you, I will always love you. Both a character flaw and strength, if you ask me.

I’ve been lucky enough (along with all the other members of the Bush Army) to foster an online relationship with the guys in the band over the last year, which has made my love for the band grow more. They are so down-to-Earth and very appreciative of their fans. I had a wonderful time a couple of weeks ago at Epicenter enjoying their first gig together as a unit in 8 years from atop the stage, which was a completely surreal experience, but I think this past week’s show at Tampa managed to supersede all that.

I made the trek to Tampa with 3 girlfriends, all Bush virgins. Well, at least virgins to their live performances, not music. We road-tripped our way up the west coast of Florida while jamming to Bush and talking about what their setlist would possible look like. It wasn’t long before we arrived in Ybor City, where the band would be playing. After having a few beers and milling around the area (it’s so quaint and quirky), we decided to get in line at The Ritz Ybor in anticipation of the 6pm door call. At that point, I decided to shoot Gavin and the rest of the boys a message via Twitter about my excitement for the gig, never expecting to get such an adorable set of replies:

I don’t think I could wipe the goofy grin off my face for hours. Well, until it was melted off by the sheer awesome-ness of their performance. We were able to score front row at The Ritz, which meant were were leaning directly on the stage – no barricades in sight. I was so pumped, I could barely contain my excitement.

They opened the show with Machinehead, which always gets everyone in a raucous mood. The rest of the show followed suit. Gavin was extremely energetic and really seemed to be giving the audience his all. The rest of the band was on point and gave extremely passionate performances. It was a completely different experience from the festival – more intimate and raw, in my opinion. They played many of the singles including Little Things, Greedy Fly, Warm Machine, Chemicals Between Us, but peppered in PrizeFighter off of The Science of Things, which I thought was an odd choice, although I wasn’t complaining. I guess I would have preferred something off of Razorblade Suitcase instead – that album never gets the love it deserves!

They concluded the main set with Everything Zen, which was an epic 8 minutes in length and completely magical. Why? Well, Gavin decided to make his way over to where my friends and I were standing, and sat down right in front of us to go to town on a solo. I won’t lie, I was completely transfixed. It seemed like he had detached from reality and was in his own world – completely lost in the music. Thankfully, between gasping for air, I was able to snap these amazing photos of the moment: 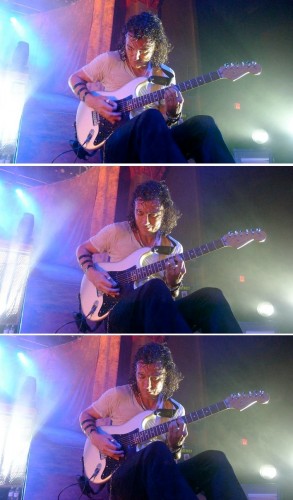 Although he really seemed intent on what he was doing and feeling the groove, he slowly lifted his head up and locked eyes with my friend, Karina. The rest was just a blur of awesome and what we later referred to as musical sex. Gavin walked down the ramp and kneeled down right in front of her as he proceeded to wail uncontrollably on his guitar, while making intermittent sexy eye contact with her. It was almost too much for me to bear, and it wasn’t even directed at me! It really was the most ridiculously hot thing ever – maybe one day I’ll be able to forgive her 😉 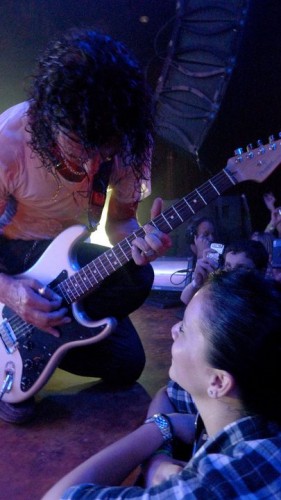 They returned to stage a few minutes later with Alien, Glycerine (rock version) and officially closed the show with Comedown. Alien has been a fan favorite for I don’t know how long – it seemed to have really struck a chord (no pun intended) with many people over the years. I, for one, have always considered it to be my favorite song of theirs. It’s tied to many emotionally turbulent moments of my youth and I feared tearing up at the show the second Gavin teased that they were playing it during rehearsals. Thankfully, I was able to control those tear ducts in the moment, but it was nothing short of special. It kind of felt like my heart was running laps in my chest throughout the entire performance of the song. However, I was able to regain enough consciousness to record it in its entirety to share with all of you.

I was sad to see the show end, and still believe they should increase that setlist by at least 5 more songs. Is that too greedy? Never! Heh…either way, I knew it was time to find their buses, sit tight and hope they had a mini meet & greet. We spun around in an entire circle trying to locate buses, before realizing that there were no buses, just a side door where an already large group of people were waiting by. Not even 10 minutes passed before Gavin walked out the door and towards the crowd. He was followed by bassist, Corey Britz, and drummer, Robin Goodridge. Corey was a sweetheart as always and Robin was hysterical. He asked my friend to hold his beer several times as he signed autographs for others so it became a running joke that she was his official beer-holder and that entitled her to take occasional swigs. 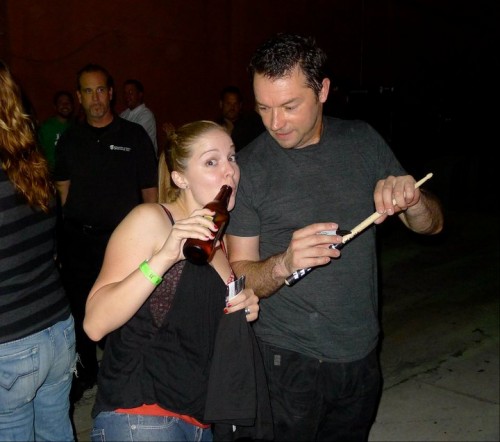 Then Gavin made his way over to us and we all took turns chatting him up and getting a photo. I was able to suck up some bottled courage and have a real chat with him this time around (pretty boys make me so nervous) about Epicenter, Twitter (he called me Melificent – so cute!) and the setlists for the rest of the tour (they will all be the same for now). Then I may have inappropriately smashed into him for a photo, which is my favorite to date: 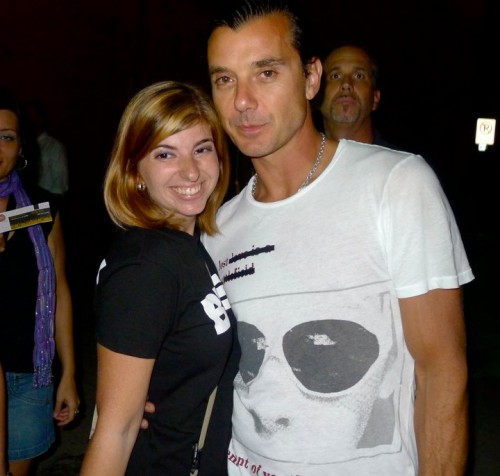 I searched for the guitarist, Chris, around the side entrance area for a few minutes, even climbing on an equipment truck for a better view, but no luck. He seemed to not have come out with the rest of the band, so my friends and I started walking to get some dinner. As I was walking, I sent him a tweet that I tried waiting around to say hello, but he wasn’t around. I put my phone away for the next 20 minutes, which was the worst mistake I could have made. When I checked my Twitter again, Chris had tweeted back asking me where I was because he was going for tacos with the rest of the guys. Um, FAIL. I tried to get a hold of him, but I definitely waited too long. But it’s alright, I know there will be a next time and with these awesome guys, every time is better than the last!

So thank you for the absolutely amazing night, Bush! You never let me down and guys like you deserve all the success in the world!

What about you guys? What has been your best concert experience? Has Twitter made it easier to connect with your favorite bands or celebrities?